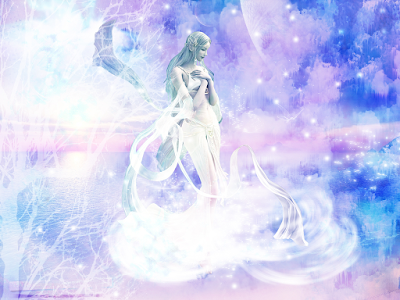 Astara found land after Atlantis went down. She rested by a lake. This was a place somewhere between North and South America. An island had been formed after the tectonic changes. It was just sand though. Barren land…

They were also leaders of Atlantis. The leaders were chosen based on their spiritual development. But then, they - the priestesses - started seeing the signs. There was darkness growing. They had to prepare. The experiment was bringing the most unexpected outcomes. So they had to come up with a plan. Of course this was, too, a cycle. The cycle was supposed to end. They formed a plan, a plan that could be changed but would always bring the experiment to the end with the outcome Gaia Sophia would be saved.

So the priestesses needed a volunteer. And the volunteer was Astara. She was young compared to other priestesses, but she was powerful and willing. Her gift was her adaptability. She could accept the change quickly and grow from it. She could heal herself, too. So, while all priestesses would be leaving the planet, she would stay. She would accept life in a limited body, but when the time came, she would start remembering and reclaiming herself.

As the dark ones were implanting others, Astara had an implant, too. Her implant was a positive one though. It was an Elohim implant. It would help her reclaim herself in the forms of her past incarnations. As the dark ones would implant all on the surface and make them forget their past with implants, Elohim implant would help Astara slowly wake up. Meet her past incarnations in dreams and visions, and merge with them, get healing from them.

Into Atlantis, beings with dark intentions came at that time. Some of the existing leaders gave way for the dark to experiment on them. They were so naïve. They should have known better. Dark ones created the new bodies and convinced others to get in them. In the beginning, it was a pleasant game. The new bodies were free of implants and there were many possibilities for new experiences. Wasn’t life an experiment after all?

Only if when you value life! The dark ones didn’t value life. After they started this new body exchange business, they slowly introduced the implants. Over time, they became experts. They were able to fool many. Before they could realize what was happening, almost all of Atlantis was implanted. All Atlanteans became slaves to them. They served them in every way possible. For the darkness, this was a game that they couldn’t get enough of. The more they played it, the more they wanted to play.

They would create these creatures and even let them into new lands. It wasn’t a surprise on the surface when you saw half men half animal. Even humans...

Dark ones liked their drinks - the elixirs they made out of flowers. When they got bored, they changed their bodies. You wouldn’t know who was who. Mother Gaia had become a planet of deceptions...

The seers of the high priestesses saw the signs well in advance. They decided to leave. Astara of all, volunteered to stay. She would stay, and she would become the anchor for the others to come back again. When the time was right - when the experiment was ending.

The day Atlantis went down, she went to the Temple of Love. To look at it one last time. She sat under the Dome of Love by the fountain. Not knowing what she would do next, she calmed herself listening to the water flow.

Most living beings had already left. They knew this was coming. Most had gone underground. They were starting new civilizations there. So, Astara sat there all alone. For the first time in her existence, she didn’t know what to do next. So she went to the place she was most familiar with. She went to her home and waited - waited for the last straw. She hoped it wouldn’t happen. She knew it would be a long wait. There would be suffering. It would not be just her suffering, it would be suffering for all. Right there lovely Astara made her mind. She would stay on the surface and help build civilizations. She would lead them as she once did in Atlantis. She would show them to live in love and harmony. Wasn’t she a Wayshower? And this would be what she would do.

Astara had wings. When Atlantis sank, she was the last one to leave.

So Astara decided to go to east. She chose today’s Mosul, Nineveh. She found humans there. She gathered them. She built temples there from soil. She healed humans, taught them how to survive. She taught them art. She showed them how to make things from mud, agriculture, and created circles of women and showed them the power of mass intention.

She had to keep most knowledge to herself, though. But she created buildings & columns... she created art. She taught art to people. Because she knew the spell of forgetfulness would consume all, even her eventually. So she decided to use art as a tool, something to make her remember.

It was a long wait for her. The people remembered her with different names. She was Isis, Ishtar to some. She was Mother Sekhmet, Hathor, Ma’at and Bastet. Many knew her as Eos, and perhaps as the last name she got: Bringer of the Dawn - Goddess Aurora!

Many times the civilizations she created were taken by big fireballs. After each, she would gather what was left and she would go somewhere else and start over. So lifetime after lifetime, the dark took a piece of her. They killed her many times. Each time she was killed, she came back again! She didn’t like wars, but she had to learn it. Until, one day she was so implanted and tired that, she couldn’t remember who she was!

This cycle is finally coming to an end, and you Astara, are becoming one again. As Aurora! As one! Like a phoenix, you are arising from your ashes! 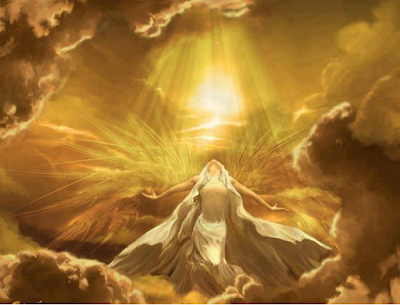